Old BoysBart Butler officially founded the MTSU Rugby Football Club in the Fall of 1980. As with any start-up venture the club had its share of ups and downs and many times the team had to pick up players from opponents so the game could be played. The club survived and slowly built up a roster of colorful characters that helped to mold the team. In those early years, the club was outfitted by many non-students and the team did not participate in the official National Collegiate Championship Series. MTSU Rugby now had its own team.

The 90’s to present dayIn 1984 and 1985, the MTSU Rugby Club competed as a club-side team and finished in the top four of the Mid-South. After the fall of 1985, the club decided that no matter the cost, the club should be a collegiate team. The next few years proved to be a struggle as many new young players filled the ranks. Steadily the team improved and soon became competitive in the hunt for the Mid-South Collegiate Title. It was also in 1985 that the MTSU Rugby Alumni Foundation was formed.

Beginning in 1988 and continuing through 1997, MTSU Rugby consistently played in the finals of the Mid-South Championships. The club won the tournament three times and came in second place a heartbreaking seven times. While there was great success during this era, there was also the need to further develop the club. 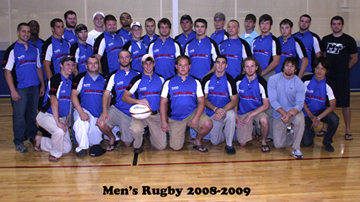 In the mid-nineties, the Alumni Foundation became more involved; we now have an excellent relationship with the University and some operating expenses are funded through the student activity fees. Players have access to a state of the art Recreation Center. This includes the use of weight rooms, an indoor practice facility for winter training sessions, and a classroom for chalk talks and video sessions.

The MTSU Moosemen had some of their best performances in the late 1990’s to the early 2000’s. The Moosemen achieved their first D1 National Playoff appearance in 1999. They would return in 2000 and again in 2002. The team was ranked nationally in those three years at 9th, 5th and 9th place. Much of this success was centered on U.S. Eagle, Cayo Nicalou. Nicalou played for the U.S. National team gaining three caps against Japan, England and Canada in the Churchill Cup.

Rugby is an amazing sport and you don’t have to have experience to begin playing. We have a great group of guys who will help you get up to speed in no time.